77% of submissions to Parliament’s Health Select Committee are opposed to changing the law on assisted suicide and euthanasia, an analysis found.

(Click here for a printable infographic that contains a summary of the findings.)

Update: The Committee concluded in their report that 80% of submissions are opposed to euthanasia and ‘assisted dying’.

“The Voluntary Euthanasia Society touted that ‘the Health Select Committee received a record 21,533 submissions on the issue, indicating intense public interest in a potential law change’, says Renée Joubert, executive officer of Euthanasia-Free NZ. “By their own logic, the results of this analysis demonstrate an overwhelming opposition to a law change.”

“When New Zealanders are given the opportunity to engage with the issue, as opposed to merely responding to a single poll question, most support the current legislation. This is certainly our experience when interacting with people all over the country.

“The public are understandably concerned that the legalisation of assisted suicide and voluntary euthanasia poses risks to vulnerable people, which is why advocates propose safeguards. However, these safeguards are unenforceable in practice.

“Polls often elicit a knee-jerk reaction, especially when the questions are emotive or leading, such as referring to a painful condition. In reality nowadays, terminally ill Kiwis do not need to die in pain. A poll question about euthanasia for pain is inappropriate.

“As the authors of the January 2017 NZMJ study admitted, “the item in our study included the terms ‘painful’, ‘incurable disease’ and ‘request’, which may have influenced participants to express increased support for euthanasia’.”

The Care Alliance analysed 21,277 submissions, excluding duplicates and a small number that could not be coded. An independent research company reviewed a sample of the coded submissions and concluded “with at least 95% confidence that the overall classification percentages are accurate within no more than 0.4% variation”.

The results of the full analysis shatter assumptions about public attitudes to voluntary euthanasia and assisted suicide. 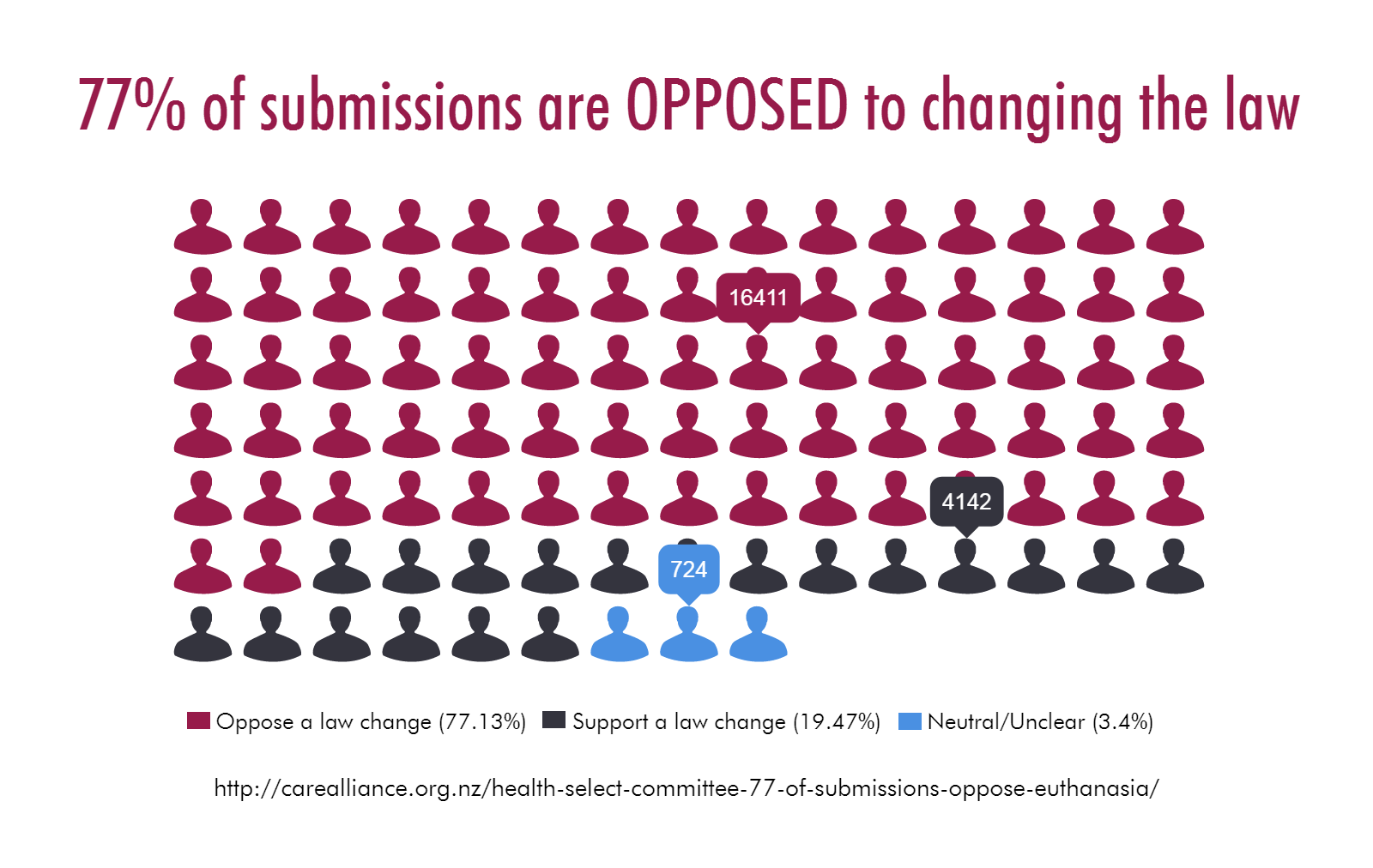 The analysis shatters the assumption that the high number of submissions demonstrates overwhelming support for a law change. 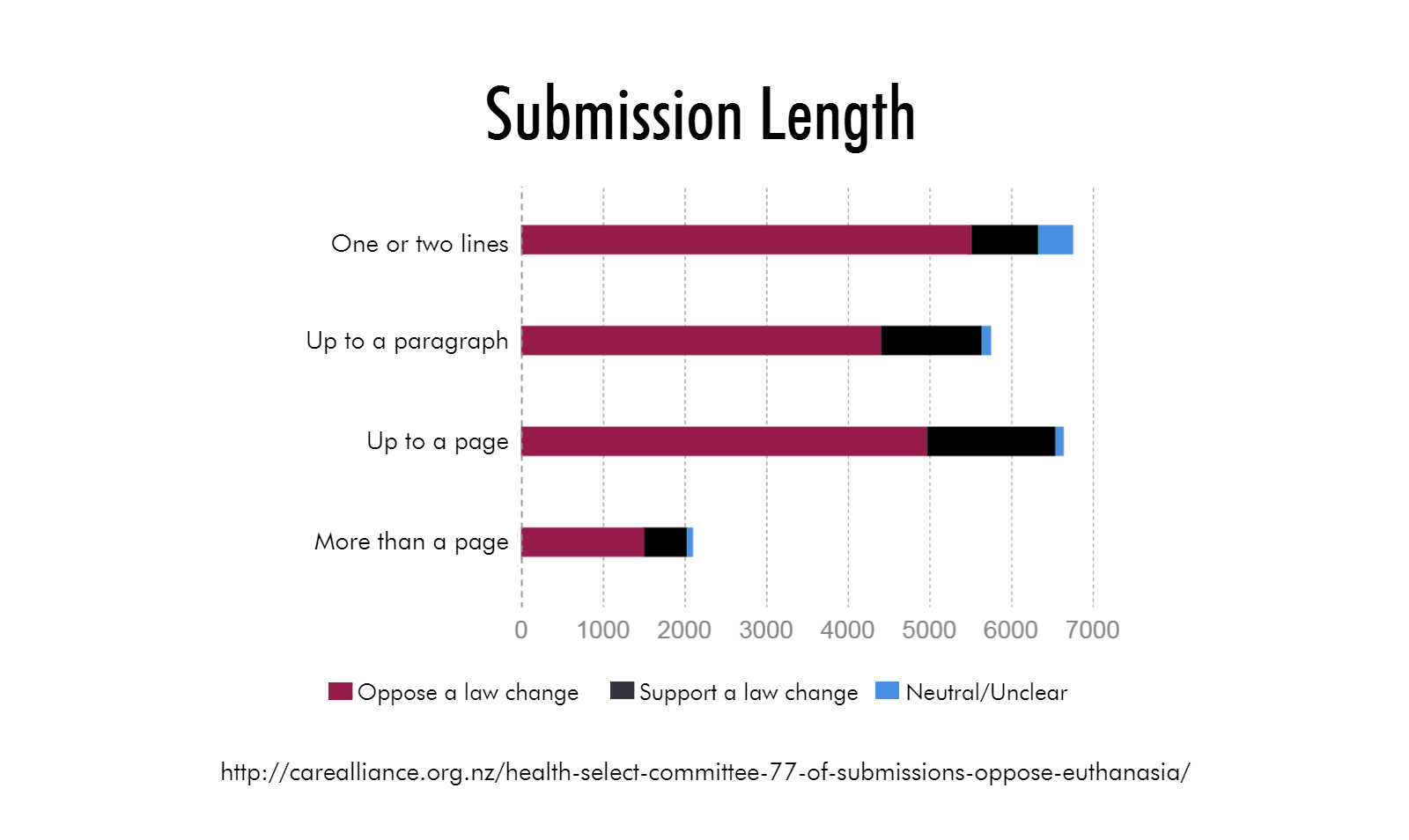 Some advocates assumed that submissions opposing a law change are mostly one-liners.

The Health Select Committee conducted an investigation into ending one’s life in New Zealand, in response to a petition by former MP Hon Maryan Street and 8,974 others in June 2015 requesting Parliament to “investigate fully public attitudes towards the introduction of legislation which would permit medically-assisted dying in the event of a terminal illness or an irreversible condition which makes life unbearable”.

After extensive media coverage about the investigation, especially during January 2016, the Committee processed 21,435 written submissions, a record number of unique submissions received on any issue to date. These, and subsequent supplementary submissions, are published on Parliament’s website.

In August 2016 Dr Jane Silloway Smith analysed a random sample of these submissions and found that 78% were opposed to changing the law while 22% were in favour. The 16000voices.org.nz campaign was launched to highlight some submissions in video and written form. 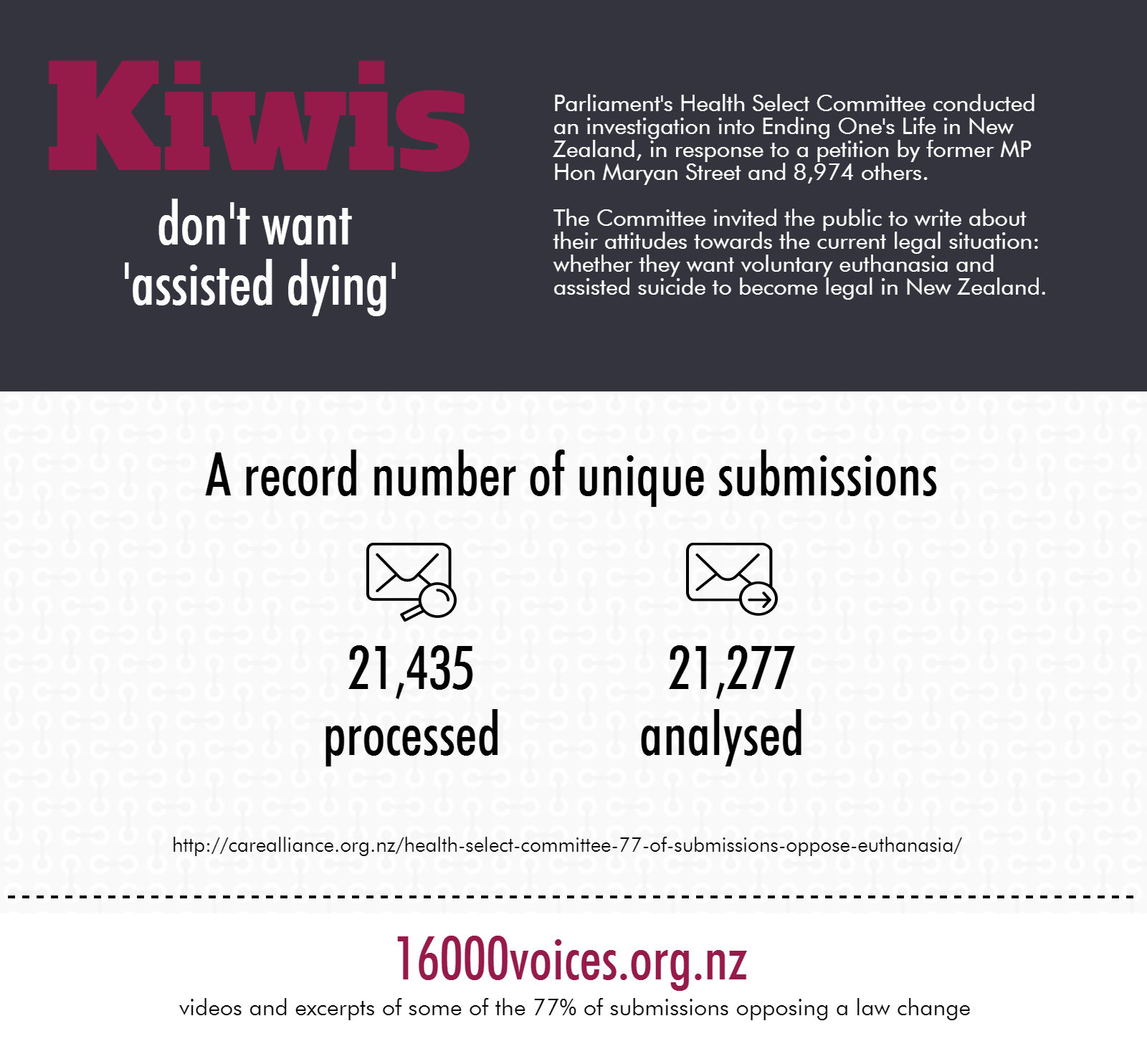