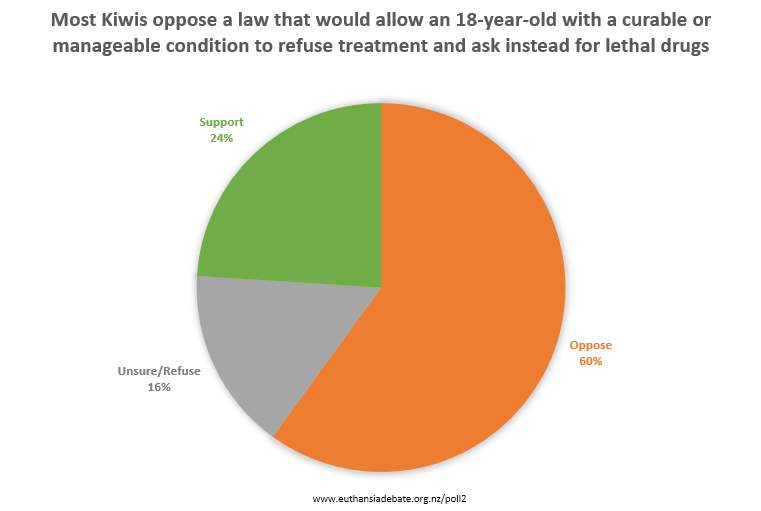 A new nationwide Curia Market Research poll has found that 60% of New Zealanders don’t want a law that would allow an 18-year-old to refuse treatment and instead choose to die by euthanasia. A quarter (24%) would support such a law.

This is despite the fact that 57% of the 650 respondents support the legalisation of euthanasia in principle.

“This poll shows that while most New Zealanders support euthanasia in theory, the majority reject how such a law would work in the real world,” says Renée Joubert, Executive Officer of Euthanasia-Free NZ.

“The End of Life Choice Bill does not require a person to receive treatment or palliative care before requesting euthanasia, because such a requirement would infringe on a person’s right to refuse treatment.

“This Bill would allow a person as young as 18 to choose lethal drugs instead of treatment or palliative care.

“New Zealanders have the right to refuse medical treatment, and we are not suggesting that this should change. However, we do want to point out that euthanasia may not be a last resort.”

An example of how this might happen is the story of a young Oregon patient with Hodgkin’s lymphoma who refused treatment that was expected to have a 90% chance of curing her condition. Instead she requested lethal drugs and her request was approved.

By refusing medical treatment, some conditions could become ‘irremediable’ and even ‘terminal’. For example, if a person with Type 1 diabetes were to refuse insulin their life expectancy may well reduce from decades to only a few weeks.

Even some people with disabilities, such as tetraplegia, could become eligible under the terminal condition clause by refusing cares and treatment for the urinary, lung and pressure sore infections they are susceptible to.

According to the official Oregon reports people have received lethal drugs for conditions that are usually considered “irremediable” rather than “terminal”, such as diabetes, arthritis, arteritis, stenosis, and musculoskeletal systems disorders – even though their law requires terminal conditions.

“If a New Zealand court or doctor were to apply Oregon’s precedent,” Ms Joubert says, “some people with disabilities or other longstanding conditions could be eligible under a terminal illness clause.” 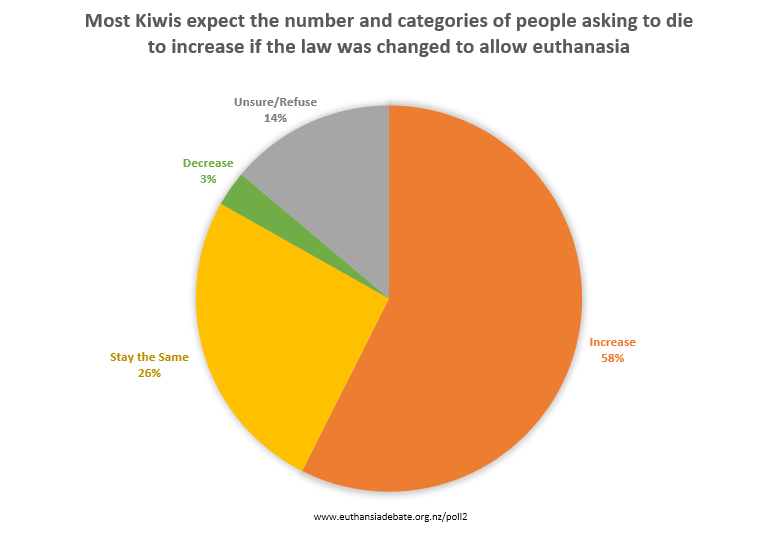 Most New Zealanders expect numbers and categories to increase

In response to another poll question 58% said that if a euthanasia law were to pass, they expected both the number and the categories of people asking to die to increase over time. A quarter (26%) thought these would stay the same, 3% expected a decrease and 14% were unsure or refused to answer.

“Once society has moved away from a blanket ban on euthanasia to allow it for a certain category of people, there will be no logical place to draw the line”, explains Ms Joubert. “There will be pressure to extend eligibility to more categories, because a law allowing euthanasia for one group would discriminate against other groups who also feel they are suffering.”

“We can expect the boundaries to be extended in response to such pressure. Changes may not necessarily go through Parliament, but may instead consist of changes in how doctors or courts apply the law.”

Euthanasia-Free NZ calls on MPs to reject the End of Life Choice Bill at its Second Reading.

The full report is available at www.euthanasiadebate.org.nz/poll2