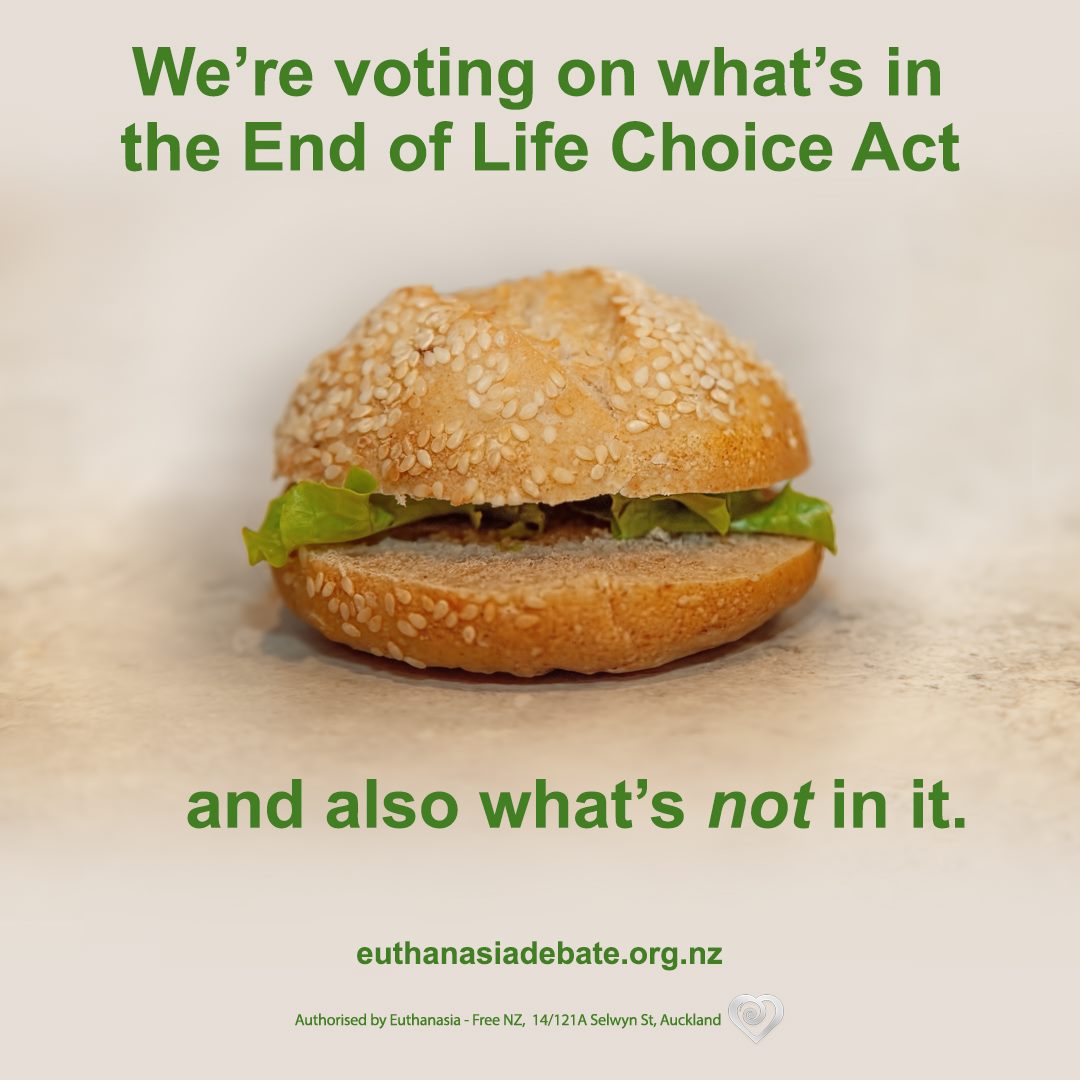 Some people say assisted dying and euthanasia laws work well overseas, and therefore New Zealanders need to vote for the End of Life Choice Act at the upcoming binding referendum.

The End of Life Choice Act omits important safeguards used in the US, Australia and Canada. It leaves out more than a third of the 68 safeguards in Victoria’s law.

Assisted dying in the End of Life Choice Act

“The Bill uses ‘assisted dying’ to refer to both euthanasia and assisted suicide.

Euthanasia refers to a patient being administered a lethal drug by a medical practitioner [or nurse practitioner].

Assisted suicide refers to a patient receiving lethal drugs at their request, which they take by themselves.”

– Departmental Report on the End of Life Choice Bill by the Ministry of Health and Ministry of Justice, page 2

In the US a terminally ill person with six months to live can receive a lethal dose to self-administer.

Two Australian states have legalised assisted dying: Victoria’s law came into force in June 2019. Western Australia’s law is similar to Victoria’s one and is coming into force mid-2021.

In Canada a person doesn’t have to be terminally ill to receive a lethal dose. The law states that a person’s death has to be “reasonably foreseeable” but the Canadian Parliament is expected to pass a bill this year to remove this clause. A person is allowed to administer the lethal dose themselves, but in almost all cases it’s administered by a doctor or nurse. Québec has a separate law with fewer safeguards.

How the End of Life Choice Act compares

Like the US laws, an eligible person has to be terminally ill and be expected to die within 6 months, among other criteria. However, the NZ Act does not require an eligible person to be living in New Zealand. Like the Canadian law, euthanasia is available to all eligible people, whether they can self-administer the lethal dose or not.

The New Zealand law can be described as looser and riskier than the US, Australian and Canadian laws because it leaves out key protections that reduce the risk of a person being pressured to request death.

Some of the missing safeguards:

Doctors don’t have to check for depression

An eligible person needs to “experience unbearable suffering that cannot be relieved in a manner the person considers tolerable”[s 5(1)(e)]. This suffering does not need to be physical. Unlike Victoria’s law [s 9(1)(d)(iv)], this suffering doesn’t need to be caused by the terminal illness. It’s possible that depression or mental illness could be the “unbearable suffering” that causes a person to feel that they want to request euthanasia.

No mental competency test when receiving the lethal dose

The End of Life Choice Act requires that a person is mentally competent when being assessed as eligible. However, it may be months later when they receive the lethal dose [s 20]. On that day the person needs to confirm whether they still want it, but the doctor or nurse practitioner is not required to confirm that they are of sound mind at that time.

In Victoria [s 66(1)(b)], Western Australia [s and Canada [s 241.2(3)(g)-(i)] people need to be confirmed to be mentally competent when receiving the lethal dose. This important safeguard was not debated by Parliament.

4 days between diagnosis and death

An eligible person could potentially die as early as 4 days after being diagnosed with a terminal illness, and without telling any loved ones. The risk of an impulsive, emotional decision is high.

The only time frame specified in the End of Life Choice Act is 48 hours between writing the prescription and administering the lethal dose [s 19(4)], which is also required in Oregon [s 3.08].

Because there’s no required waiting period between being diagnosed and having a prescription written, both could potentially happen on the same day, if both doctors are available to confirm the person’s eligibility in time.

Parliament voted down adding a waiting period of 1 week [SOP 308], without debating this.

No requirement to receive treatment first

Most New Zealanders assume that the End of Life Choice Act would allow euthanasia only as a last resort. However, a person doesn’t need to receive any treatments or palliative care before requesting a lethal dose [s 11].

Parliament voted down two amendments that would have required euthanasia to be a last resort for people who can’t be helped by palliative care, [SOP 286 and SOP 300], without debating these.

No requirement to speak to a specialist

Neither doctor in the euthanasia process needs to have training or experience in the area of the person’s illness. Neither doctor needs to have vocational registration [s 4]. This was not debated by Parliament and is not the case in Victoria [s 11] or Oregon [s 1.01(4)].

The End of Life Choice Act would allow a doctor who recently graduated from medical school to be the attending medical practitioner, overseeing the person’s euthanasia application.

No independent witnesses are required at any stage of the process

The End of Life Choice Act doesn’t even mention the word “witnesses”.

In contrast, two independent people (as well as a doctor) need to witness the person signing their written request in Oregon [s 2.02], Victoria [s 34], Western Australia [s 42(3)(b), s 43], and Canada [s 241.2 (3)(c)]. They need to confirm that the person is of sound mind and is signing it without being pressured. See here for the other US states.

Victoria’s law also requires an independent witness when the lethal dose is administered and shortly before that when the person confirms that they still want to go ahead [s 65].

Parliament voted down requiring an independent witness at the death [SOP 211] and without debating this.

The End of Life Choice Act has weak safeguards against pressure:

Only one doctor needs to check if the person is expressing their wish free from pressure [s 11]. This doctor can be fresh out of medical school with provisional registration and little experience. This doctor doesn’t need to speak to the person face-to-face and doesn’t need to have met the person before. Parliament voted down amendments [SOP 300 and SOP 269] which would have tightened this.

We could expect some death tourism from Kiwi-passport holders who are living overseas.

In the US and Australia an eligible person needs to live in a particular state to use their assisted dying law. The End of Life Choice Act requires eligible people to have a NZ passport or permanent residence visa [s 5(1)(b)], but they don’t have to be living in New Zealand. Parliament didn’t discuss this.